Two travel-weary souls, wearing matching red slippers, meet in an airport far, far away from either of their homes. This has become the standard meeting scene of Tess and I over the years; this time was no different. After our reunion, another long layover, a flight, and a bus ride delivered us to our destination, the town of El Chalten, Argentina. Two years ago Tess and I had spent six weeks together in this town. It was an experience that for me was equal parts challenging and rewarding. The brief time we actually spent climbing during that month and a half was incredible; I had the single best climbing experience of my life on those steep, golden-hued granite walls. The time in town, the waiting, was hard and often dark. There were sunny moments, too. I made some great friends. Friends who I would come back to see again and again even if it wasn’t for the climbing. But when the time came to leave, I was beyond ready. I returned to my home weaker, slower, heavier, and more unhealthy than when I left. 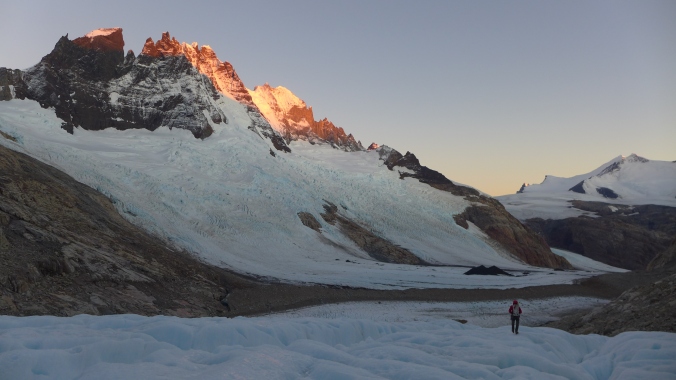 Dawn breaks on the Glacier Marconi

I promised myself it would be different this time. The town of El Chalten has so much to offer in terms of outdoor recreation. Even when the weather in the mountains is bad, it more often than not beautiful and clear, alibet a bit windy, in town. There are hundreds of sport climbs within walking distance of the hostels we frequent. A plethora of fun bouldering lies waiting in excess in the nearby foothills. The hiking and trail running options, almost all of which are accessible by a short walk from town, are beautiful, fun, free, and nearly limitless in potential. The icing on the cake is that with friendships already established, finding a motivated partner is never an issue.

Training in the park with eyes on the prize.

This time my problems came from the other end of the spectrum. How do I stop my activities in town from negatively affecting my mountain experiences? No doubt, a high level of suffering often occurs when attempting to climb in these mountains. The only thing that can effectively combat this is an even higher level of motivation to be there. With options to sleep in, eat well, relax in good company, and then head out for some fun, mostly safe climbs and trail runs, i found this motivation beginning to wain. In addition, when things didnt go well on those “easy” climbs, I struggled to convince myself that the results would be different in the harsh and often unforgiving mountains. If I cant climb a 6a graded sport climb, why think I can climb a 6a ten rope lengths up on a cold, intimidating peak?

We kept hoping, but dared not whisper a single word aloud. A 36-hour gap in the notoriously bad weather and appeared and it was Tess and I’s first foray into the mountains this season. Attempting to climb a peak called Guillaumet, one of the the Fitz Roy range’s “bookends”, in a single push from “car-to-car”, we left at midnight during the still ominous weather. Hours of hiking separated us from the base of the peak. The wind, strong enough at times to make us gasp for breath, was a constant companion during those early morning hours. 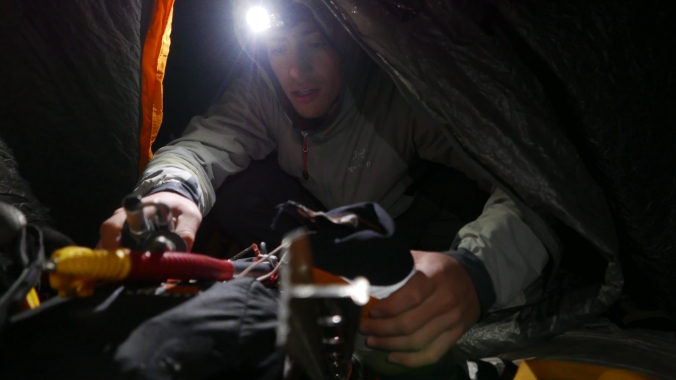 Readying for another pre-dawn, alpine start. Photo by Tess Ferguson.

We reached a large, overhanging boulder and took refuge under its cold, granite roof. The rain had changed to snow, and though the forecast promised and end to it soon, we remained skeptical. We sat, waiting for something to happen. Sure enough, something did. Climbing team after climbing team walked biy us, no doubt, on their way, to the same objective. We too, hiked on.

A pink-hued dawn greeted us at the base of a large snow slope. The clouds, lifting ever-higher, slowly revealed their closely guarded treasure. Forms began to take shape, and vail was finally removed from the mountains.

The storm retreats, the climbers approach.

We followed the conga line of climbers up higher and higher. Commands between partners in every language filled my ears. Above climbed a guide and client from Italy. Below, two Frenchmen, one who had lived in Finnish Lapland for 6 months. The now cloudless day was warming up rapidly, and the snow we were climbing, that bonded us to the side of the mountain, was turning more and more water-like. Finally we reached the rock. After waiting in line a while, it was our turn to climb. Two more pitches of snow-filled cracks and very scrappy climbing lead us to the summit snow field. Ten more minutes of moderate effort saw us on top of my first Chalten summit. While it was far from the remote mountain experience I had imagined, it was special all the same. All that remained now was the 12-hour decent back to the road.

Friends and neighbors, for years now now I have, in secret, been collaborating with a small group of talented and diverse individuals to create something that we believe is unique, fun, entertaining, and beautiful. The time is now right to share it with the world.
Remember that one time, in August, when I biked to Norway, rope-soloed the 400 m (1300’) Atlantis route on Stora Blåmann, and then biked home?
Just before Thanksgiving @itskneil and I cranked out a long-standing dream/goal of mine, the 4+ State Challenge, a brainchild of none other than Rad @chadheddleston himself. This mission started with 42.9 miles (68.7 km) of trail running, following the Appalachian Trail from the PA/MD state (Mason-Dixon) line in the north, went down through WV, and finished in VA (just south of Harpers Ferry), covering 4 states. The second part of the show involved hopping on bikes for a 60 mile (100 km) ride along the C&O Canal tow path, which took us into a 5th jurisdiction, The District of Columbia (Washington D.C.), giving us the coveted “plus”.
Not so “insta”, but two weeks ago I completed a solo bike tour from Finland’s Southernmost to Northernmost point. 1450+ km in 6 days, averaging a bit over 240 km of riding per day. It felt like a lot. I carried all the necessary biking and camping equipment with me, and bought food when needed along the way. In southern Finland I had my choice of convenient, road-side bus stop shelters to sleep under. In the middle of my journey I had lovely friends who took me in, feed me well, and let me sleep in a bed. The last few nights I made use of all that camping stuff and slept in the woods. Weather and road conditions were a mixed bag, as they should have been. My days were long and while I regret having had to ride so much in the dark, missing the scenery of this beautiful country, I did get to spend my last evening cycling under the Northern Lights. Fair trade. More photos from the trip coming... sometime.
Yesterday I completed my “Forest Gump trip”; simple in concept, hard in reality. I left from my front door and, alone and self-supported, completed 900 km (560 miles) of round-trip cycling in order to make an aid solo ascent of Atlantis, a 400 m (1300 ft) climb on North Face of Stora Blåmann, located off of Norway’s northwest coast. The climb was completed over the course of 3.5 days, with two nights spent on the wall. Everything went as smooth as things can on a wall and (mostly) as planned. Plenty of rain was encountered, lots of cookies were consumed, and being the only one on the entire wall made social distancing easy to uphold. In the words of Chongo via a great friend, “When you solo a wall, everyone gets to be the captain. 👨‍✈️ “
Having dreamt about it since last fall, yesterday I completed my very own triathlon. This was a one-man race through Finnish Lapland’s fell-country. The idea centered around Finland’s most iconic trekking route, the 55km (~34miles) long Hetta-Pallas route. To start, I swam across the lake to access the beginning of the route (0.8km or 0.5miles). Normally this is completed by water taxi. Then I jogged/ran/walked the Hetta-Pallas route, traveling though mosquito-invested swamps, beautiful fell landscapes, hot sun, and soaking thunderstorms. To finish off the tri-sport day I biked from the end of the route back to my home, some 61km (38 miles) further south. My splits were: 23:45 on the swim, 8:20:26 on the run, and 2:22:00 on the bike. Total time from start to finish was 11:55. I was really surprised with how good I felt and how well my body and mind performed throughout the event. I had imagined I would suffer far more than I did. So grateful for my healthy body that allows me to do such things. Big shout outs to: @elinamolkkari and @elli.noora for route beta, @katiet618 and @codihaj for ultra-running advice, and @hcruuskanen and @sisuoutdoor for loaning me necessary race equipment. The biggest thanks goes to the ultra-supportive @jylhanhenna for being my one-man SAG crew throughout the day.